Museum of State flag of republic of Azerbaijan 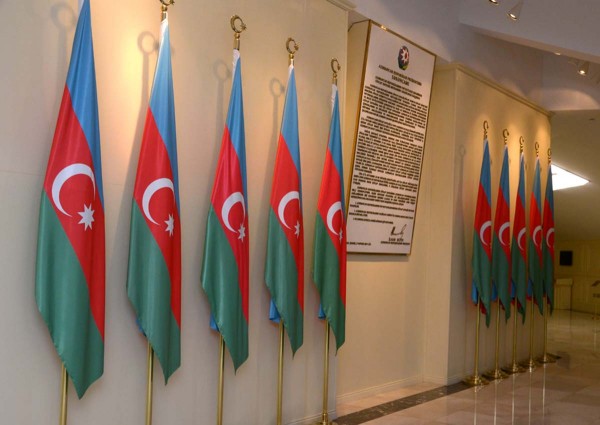 Azerbaijan Republic National Flag museum - The inauguration of the Azerbaijan Republic National flag museum took place on November 9, 2010. The Museum was constructed according to the order of the President of Azerbaijan and has been created in the National Flag Square. The Museum which was created in the form of eight-pointed star is located under the flag post pedestal in the National Flag Square. The restored flags of the states, khanates existing in Azerbaijan in different periods, including Iravan khanate’s restored flags; also flags end items, emblems belonging to XVII-XVIII centuries; constitutions, post stamps, examples of the money symbols, orders and medals accepted in Azerbaijan Republic in different years; a lot of photos and documents representing the creation, formation and development of Independent Azerbaijan Republic, activities of Ilham Aliyev in progressing our country; the State Flags which Great Leader Heydar Aliyev and President Ilham Aliyev have kissed during inauguration after being elected as the presidents; the flag of the Commander-in-Chief of the Armed Forces, the battle flags and the ceremony wears of the army units of the Armed Forces are demonstrated in the museum constructed on the basis of Azerbaijani architects and designers and arranged with the modern design technologies. The certificates given by Gynnes world record’s organization, affirming that Azerbaijan State Flag’s post is the highest in the world; different books, photos, and also the flag fluttered above the building of Azerbaijan Nation Republic’s Embassy in Turkey in1918-1920 years. Most of these exhibits have been demonstrated for the first time. There is also multi-media device in the museum.
Address: Abbas Qurbanov str 10, Baku
Теl: (+99412) 515-91-90
Ist verfügbar: Montag – Freitag, 09:00 - 18:00