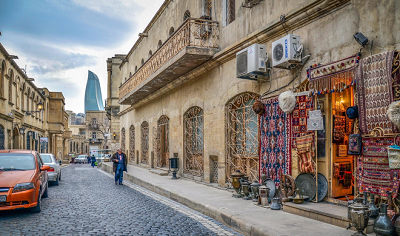 In the center of Baku there is the “city within the city”, historical and architectural reserve, surrounded by a fortress wall – the Inner City. The first mentioning of the Baku fortress dates back to the 12th century. In the past, the entire Baku was within the limits of the Inner City. Today it is one of the most densely populated places of the Middle East.
It was used as the backdrop for the popular Soviet films such as “The Diamond Arm” and “The Amphibian Man”. The main attraction of Icheri Sheher is Shirvanshah Palace of the 15th century, when the shahs moved their capital from Shemakha to Baku.
In 1977 the complex Icheri Sheher received the status of the historical and architectural reserve.
Since 2000 it has been in the UNESCO list of World Heritage.