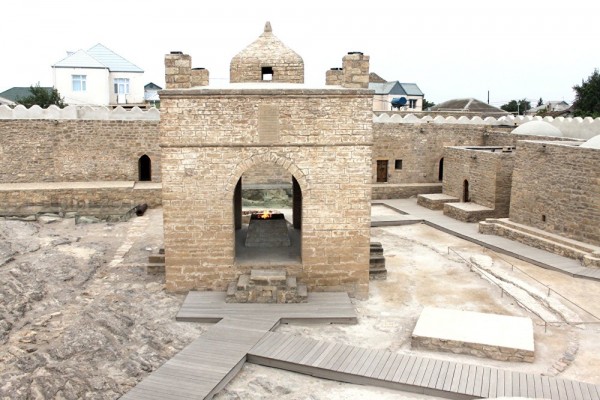 Standing 30 km from the center of Baku, on the southeastern outskirts of the village of Surakhany on Absheron Peninsula is the temple of Zoroastrians - Ateshgah (literally “The House of Fire”, “The Place of Fire”). The territory of the temple is known to the world due to its unique natural phenomenon - the burning of natural gas (gas, breaking onto the surface, lights up after contacting oxygen).

The temple is a pentagonal structure consisting of 26 cells and one room surrounded by the battlement with the entrance portal with the guest room, balakhane, above it. In the center of the courtyard there is the rotunda of the temple altar with unquenchable fire. Near the temple is the rectangular hole where the bodies of the dead Indians were burnt in the sacred fire. The temple in its present shape was built in the 17th – 18th centuries, but the history of the place goes deep into the centuries - roughly from the beginning of our era the territory hosted the sanctuary of Zoroastrians.

After the restoration works in 1975 the temple was opened to the public as a branch of the State Historical and Architectural Museum-Reserve and was named the Shirvanshahs Palace Complex. Today it is one of the most visited monuments, pilgrims of various religions are drawn there.