The Republic of Azerbaijan has an existing transport infrastructure, which includes air, rail, highway, marine and pipeline transportation.
Azerbaijan is a major logistics centre, through which is passing the shortest way from Europe to Central Asia, the Middle and Far East, in particular transport corridor TRACECA and North-South road and rail routes connecting the Black Sea and the Caspian Sea, in the same territory.
According to the State Statistics Committee in recent years, an annual average the vehicles have been transported through the Republic of Azerbaijan 177.8 million tons of cargo, 47.2% of which falls on the road transport, 15.3% - the railway, 6.6% - sea transport , 30.9% - of pipelines (including 18.2% - BTC, 1.8% - the South Caucasus Pipeline).
69% of all freight is carried by the private sector.
Railways: 2,944 km.
Highways: 59,141 km. 29 210 km of it - with hard surface.

Azerbaijan Airlines (AZAL, АЗАЛ “Azerbaijan Airlines») are part of the “Azerbaijan Airlines” CJSC which is the largest airline and national carrier of Azerbaijan. “Azerbaijan Airlines” CJSC is a member of the International Air Transport Association (İATA). It is based in Baku.
In 2014, the year after the purchase of a new batch of aircrafts «Boeing» for further flight, it is planned to open permanent routes to North America and Southeast Asia. More information about the company's activities and schedule of flights is available on the official website
Heydar Aliyev International Airport meeting the requirements of international standards is the main airport-based airline, is located in the north-east, 20 km from Baku the city, and connected to the city by two modern high-speed highways. Duty free shops (Duty Free) operate at the international airport located both in at point of arrival and point of departure. In the area Duty Free the purchases are paid by cards and in cash, in U.S. dollars, euros and Russian rubles.
In accordance with the order of the President of Azerbaijan Ilham Aliyev, in April 2011, Heydar Aliyev International Airport is under reconstruction. In April 2012, it was put into operation a new runway capable of accepting the most heavy and modern liners. Length of the new runway is 4000, width - 75 meters, and the area - 325 thousand 500 square meters.

The complex of buildings of Baku railway station consists of an old Tiflis station, built in 1884, the new building of the Baku-Passenger Station (60-70s of XX century) and Sabunchu station (1924), specially built for the USSR's first electric trains which had to carry the workers to the oil fields of Absheron (Baku-Sabunchi).
Station complex is in the centre of town, next to 28th May underground. International passenger traffic on the Baku-Moscow-Baku, Baku-Astrakhan-Baku, Baku-Makhachkala-Baku, Baku-Rostov-Baku, Baku-Tbilisi-Baku, Baku-Kharkov-Baku, Baku-Odessa-Baku, Baku -Tyumen-Baku, Baku-Novosibirsk-Baku routes is realized from here. Trains also make trips to Ganja, and electric trains to Sumgait city, Hovsan and Mardakan settlements.

The Azerbaijan State Caspian Marine Company (KASPAR) is a major ship owning company in the Caspian Basin. It is a diversified transport organization whose main activity is the transportation of goods with a predominance of oil and oil products. Navigation areas: Caspian, Black, Mediterranean and Marmara Seas. Strategies and priorities for the development of the shipping aim at making better use of the Eurasian Transport Corridor.
The main production base of the shipping company is a transport fleet consisting of 70 vessels, 30 of which are 34 tankers (water carriers), 26 universal cargo ships, and 2 roll on- roll-off and 8 marine rail cargo ferries, with a total deadweight of 316.0 thousand tons.
Today tanker capacity of Azerbaijan estimated 15-20 million tons of transported oil and oil products per year. The active development of ferry services on the lines of Baku-Turkmenbashi-Baku, Baku-Aktau-Baku is being planned.

The road network is securely connected to all the cities, regional centres, towns, airports, seaports, railway stations, reservations, resort and tourist recreation areas, as well as border crossings with neighboring countries.
Main roads along which the interstate flow of vehicles with cargo and passengers is the Baku-Alat-Ganja-Gazakh-Georgian border (Azerbaijani segment of TRACECA corridor), 503 km long border with Russia, and the Baku-Astara-border of the Islamic Republic of Iran ( Azerbaijani segment of “North-South” corridor), with length of 521 km.
Road transport in Azerbaijan has been fully privatized. Transportation of passengers and goods are engaged mainly by the corporate enterprises and the private sector (companies and physical persons).
International transport of goods in the Republic of Azerbaijan and the transit through its territory to other countries make truckers of 40 countries of Europe and Asia. Azerbaijan has a passenger bus service to the cities of the Russian Federation, Georgia, Turkey and the Islamic Republic of Iran.
International passenger traffic carried by the Baku International bus station complex, located at the entrance to the capital.

Baku metropolitan began its activity on November 6, 1967. At present metropolitan consists of 23 stations, and its total length is 34,6 km. It has two lines with a compound structure of trains movement which can be conditionally divided into 5 routes.
In 2010 the construction of the second depot named after Ilgar Garayev was started near the station “Darnagul”, its opening is envisaged in 2014-2015. 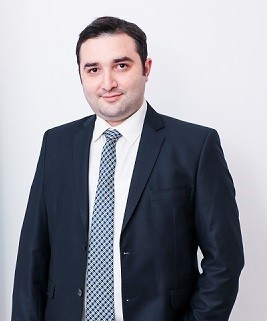