10 Reasons why you should visit Azerbaijan 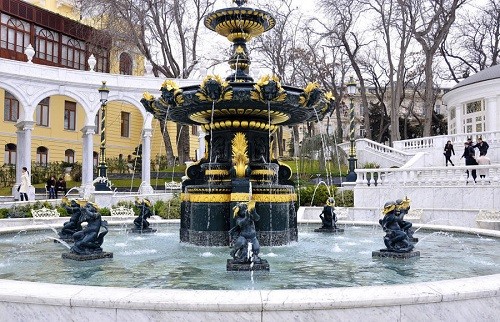 Have you ever heard of it?

Do you know where is it exactly? Azerbaijan is a country located in the southern part of the Caucasus, at the crossroads of Southwest Asia and Southeastern Europe. It shares a border with Russia, Georgia, Armenia, Iran and its exclave with Turkey.

Due to its particular geographic location, Azerbaijan is a real blend of East and West, with a deep and intriguing history. For this reason, in my opinion, this is a particularly interesting Caucasian country.

Azerbaijan is an ex-Soviet Muslim country. When you enter a café, they greet you with ”Salam”. But when you have a vodka shot with them, they will exclaim ”Nasdrovia!”. They possess Middle Eastern cordiality but, at first, they may seem to have the seriousness of a Russian.

The blend is too chaotic and, for me, this is the top reason why you should visit Azerbaijan.
The most secular Caucasian country
Azerbaijan was the first Islamic country ever to declare itself a democratic and secular Republic ( in 1918).

It was also the first Muslim country to open a theater. Perhaps, you think that this last statement is sort of stupid but, believe it or not, in conservative Muslim countries, such as Saudi Arabia, theaters and cinemas have been allowed since very recently.

Around 95% of the population are Muslims (85% Shia and the rest Sunni). Nevertheless, I invite you to take the smallest district in Cairo, Dubai or Amman and you’ll find a larger number of mosques there than in the entire city of Baku.

Atheism is common among young people, women barely cover their heads and alcohol is widely available everywhere.
Baku is an almost futuristic city that combines both tradition and modernity
Why should the capital be among the reasons why visiting Azerbaijan?

Because Baku is a city that shocks and surprises anyone.

From a very ancient and perfectly restored Old City to some of the most extravagant buildings built thanks to petrol, Baku is a luxurious capital that managed to keep all their ancient sites.

One of the cheapest countries in the world
If you find a cheaper country than Azerbaijan, please let me know.

Seriously, this country is too cheap for what you get. Outside of the fancy places in Baku, at local eateries, you’ll pay a maximum of 4 AZN (2USD) for a filling meal. Since the country is rich in gas and petrol, the price of transportation is just ridiculous.

Visiting the remotest and most epic sites and fortresses
Seriously, check this castle out.

It is called Alinja castle and it is, by far, the most off the beaten track – and stunning at the same time – castle I have ever been to. During the few hours I spent wandering around its walls and climbing its surrounding hills, I didn’t see a single soul and, probably, nobody had come here during the whole day.

Outside of the main touristic trail that follows the road from Baku to Sheki, Azerbaijan is filled with many off the beaten track places which are yet to be discovered.
Huge landscape contrasts
Our beloved Azerbaijan is a tiny country, but it turns out that 9 out of the 11 climate zones can be found there: From high altitude Caucasian mountains to vast hot deserts, green meadows and coastal areas.

Besides, did you know that 50% of the mud volcanoes in the world are found in Azerbaijan? They are located around Qobustan, 50 kilometers from Baku. Soviet relics are still found
From abandoned factories to collective farms, like in any good former Soviet Republic, in Azerbaijan you still find a large Communist heritage.

My favorites were Dashkashan, a Soviet mining town full of abandoned mines, and Ivanovka, the only place in the world where Soviet collective farms are stll functional. The food is also a real blend of east and west
Sitting at the crossroads of Southwest Asia and Southeastern Europe doesn’t only influence the cultural behaviour and the way they look but, over the centuries, it has also shaped the extremely varied Azerbaijani food.

Whereas in other countries from the region, the food may be a bit monotonous, in Azerbaijan is extremely varied.

My favorite dish is dushbara, a dumpling soup typical of the northern part of the country. It is not right to say that Azerbaijanis are the nicest people in the Caucasus because you find awesome people all around the region but Azerbaijanis are, definitely, very hospitable and, maybe because they are Muslims, I always felt an extra bit of hospitality versus other countries.