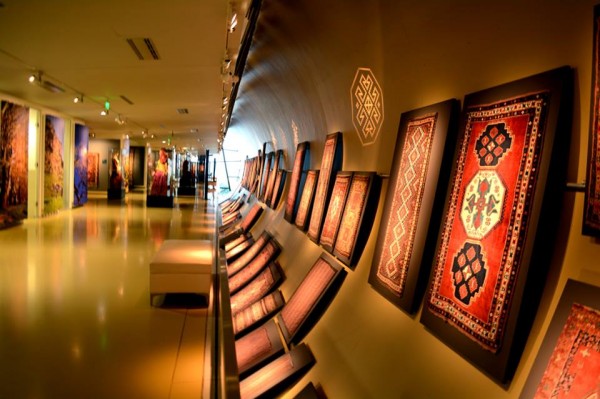 At the time of establishing, it was the only museum that was dedicated to the art of carpet weaving. The main purpose of the creation of the museum was to store, research, and demonstrate unique examples of the carpet weaving art, which are the Azerbaijan’s national heritage. The initiator of the museum was Latif Karimov – an outstanding scientist and carpet weaver, the founder of the science of Azerbaijan Carpet Weaving Art, artist and teacher, author of the fundamental work Azerbaijani carpet.

In 2007, the President of the Republic of Azerbaijan, Ilham Aliyev, signed a decree for the creation of a new building for the museum in the territory of Seaside National Park, within the framework of a joint project of the Ministry of Culture and Tourism of the Republic of Azerbaijan, the Heydar Aliyev Foundation and UNESCO. In 2014, under the direction of Austrian architect Franz Janz, the museum building, which meets the all modern requirements, was completed. Over the years, the museum is continuously developed and has become one of the main storage of samples of the Azerbaijan national culture.

The museum has become a research-training and cultural-educational center where many events, such as exhibitions, international symposiums, and conferences, are held. During its 50 years of existence, the museum has organized more than 30 exhibitions in different countries throughout the world. In 1983, on the initiative of Heydar Aliyev and the organizational support of UNESCO, in the Azerbaijan Carpet Museum was held an international symposium entitled Art of Oriental carpet weaving.

Today, the Azerbaijan Carpet Museum, which is located in one of the country’s most modern buildings, not only stores a rich collection of artifac.