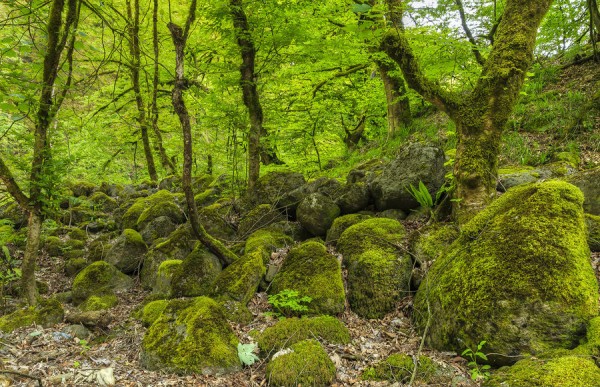 Hirkan National Park (Azerbaijani: Hirkan Milli Parkı) — is a national park of Azerbaijan. It was established by the decree of the President of Azerbaijan Ilham Aliyev, in an area in Lankaran Rayon and Astara Rayon administrative districts on February 9, 2004 on the basis of the former "Hirkan State Reserve" which it superseded, on a surface area of 29,760 hectares (297.6 km2). It was enlarged by presidential decree on April 23, 2008 from 29,760 hectares (297.6 km2) to 40,358 hectares (403.58 km2).

The area of Hirkan National Park is 99% covered by forests in a primarily mountainous region, and is strictly protected. It constitutes one of the largest contiguous forests in Azerbaijan, which is not interrupted by any settlement or pasture.

The Hirkan National Park protects the humid subtropical and humid temperate forests in the area of the Lenkoran Lowland and the Talysh Mountains, sheltering many endemic plant and animal species.

The ecosystem of the Hirkan National Park, belongs to the Caspian Hyrcanian (Girkan) mixed forests ecoregion, an area of lush deciduous broadleaved lowland and montane forests (subtropical and temperate rainforests) that completely cover the Talysh Mountains and partially cover the Lankaran Lowland.