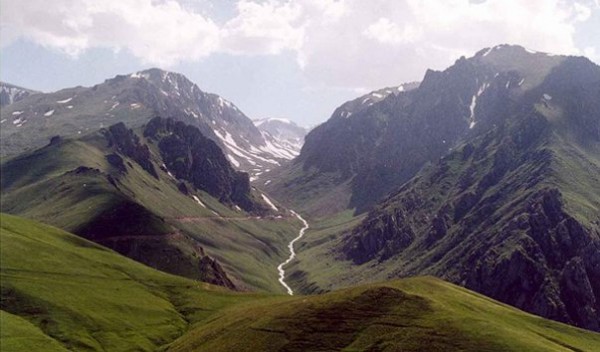 Zangazur National Park was created on 25 November 2009 in an area of 42797,4 hectares on the base of Ordubad National Park named after Academician Hasan Aliyev and Shahbuz State Nature Reserve in Nakhchivan Autonomous Republic. It was named after Academician Hasan Aliyev who is considered as a founder of ecology in Azerbaijan.
Adjoining to the National Park is Ordubad State Nature Sanctuary with an area of 27870 hectares.
The objective pursued in the creation of Zangazur National Park was to protect different components of the area which has a distinctive climate, terrain and other physical geographical features as well as various animal species including endemics and species of fauna that are typical to this area. The park is also charged with the task to facilitate environmental monitoring and promote education and tourism.
Zangazur range of mountains reaching 3200 meters on average is the highest range of the Lesser Caucasus. The highest peak of the range making 3906 meters is located in the National Park.
The last third part of the Zangazur range is Soyug Dagh (Cold Mountain) which also belongs to the National Park’s area. The height of Soyug Dagh varies within a range of 2000 to 3000 meters. This part of the mountain slopes down for 12 km to south and west. It vomprises steep slopes with precipices and narrow spring valleys. Eroded rocks are widespread here. In Soyuq Dagh, ancient glacial relief declines and finally disappears downwards.
Zangazur National Park is a mountainous area. Its climate is generally cold characterized by dry summer. The mean temperature is -30 C to -100 C in January and -100 C -250 C in July. The annual precipitation is 300-800 mm. The watercourse network of the region is composed of Gilanchay, Vanadchay, Duylunchay, Aylishchay, Ganzachay, Kotamchay, Kilitchay and Ordubadchay rivers. They are fed by rains and melting snow. The Araz River forms the border with Iran. The landscape of the area varies in type. Mainly, dull brown, grassland dull brown, alluvial grassland, mountainous forest, turf-type mountainous grassland terrains prevail in the area.