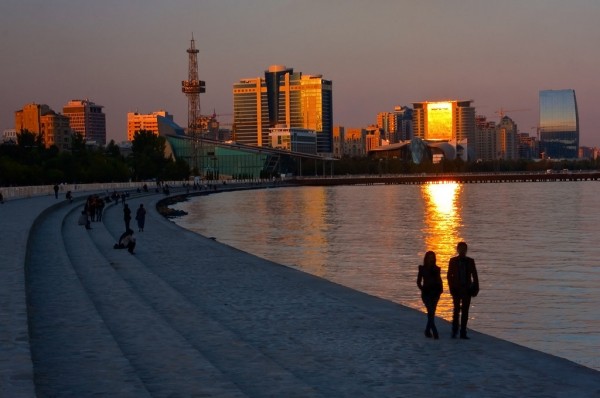 The Boulevard along the Caspian is a beautiful, several kilometer long parkway that is a real gem of the city. Baku Boulevard (also known as National Park) is a promenade established in 1909 which runs parallel to Baku's seafront. Its history goes back more than 100 years, to a time when Baku oil barons built their mansions along the Caspian shore and when the seafront was artificially built up inch by inch.

The park is about 3 km and 750 m in size and located in south coast of the Caspian Sea. It starts at the National Flag Square and ends at Freedom Square. According to the Azerbaijan Cabinet of Ministers, the boulevard's size is expected to reach 26 km, which will cover areas including Bibiheyb?t and Bay of Baku by 2015.

The boulevard contains an amusement park, yacht club and musical fountain, and various statues and monuments. The park is popular with dog-walkers and joggers, and is convenient for tourists, being adjacent to newly built International Center of Mugham and musical fountain.

The boulevard marked it is 100th anniversary in 2009 as the specific date of it is creation is still unknown.